“Travel is fatal to prejudice, bigotry, and narrow-mindedness, and many of our people need it sorely on these accounts. Broad, wholesome, charitable views of men and things cannot be acquired by vegetating in one little corner of the earth all one’s lifetime.”

If more people lived by these words, the world would be a better place.

It is a chilly Spring day. We had a huge downpour last night and the rain is continuing to soak everything steadily this morning. Since the ground is still so warm from the high temperatures we have had in the past week, a fog is billowing from the ground and filling our little valley in a thick mist.

This reminds me of a trip I took to New Zealand’s Franz Josef glacier a few years ago. 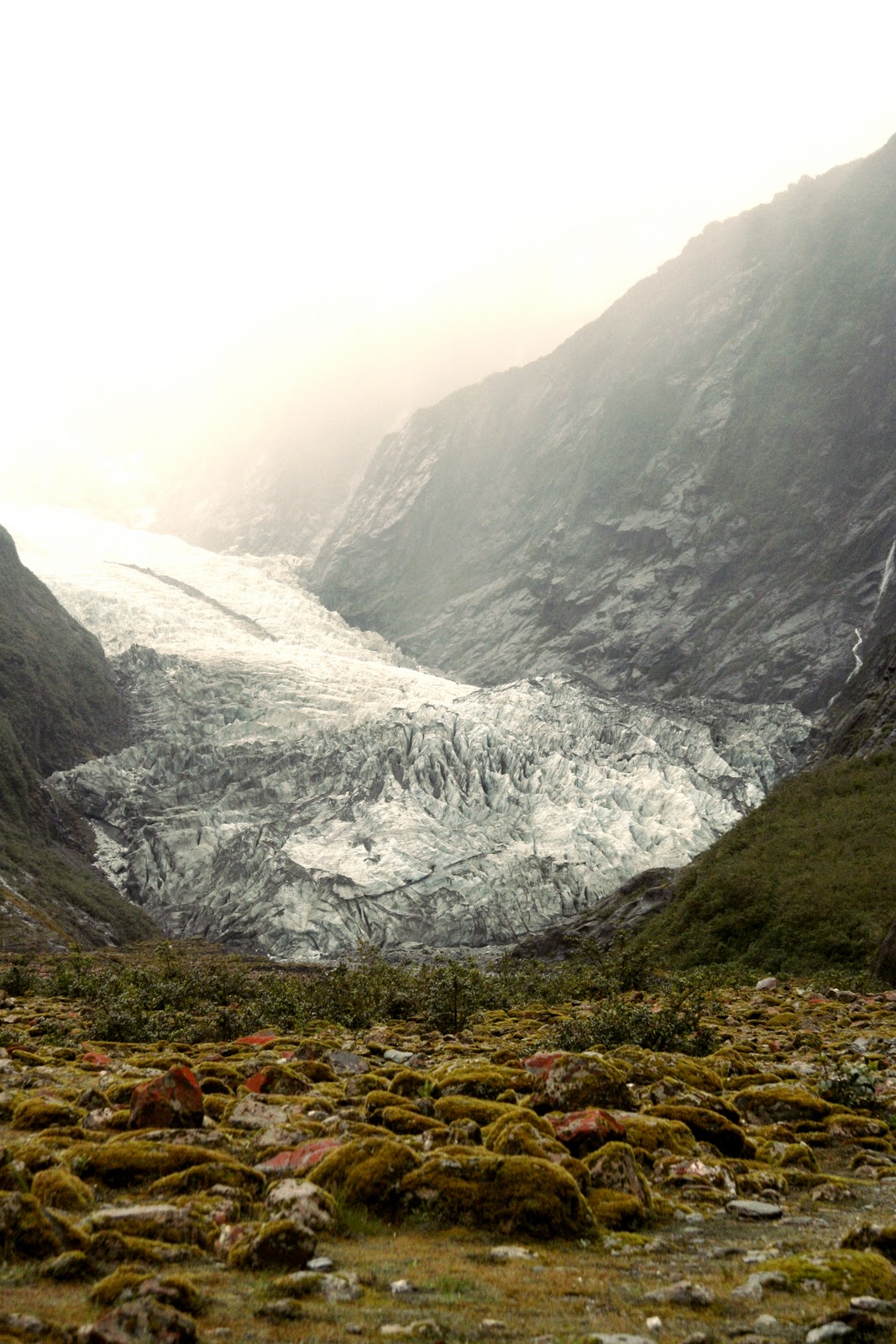 Rainy days can be happy days.

I took this downtown Montreal a few years ago. The exposure was just right to catch both the red and green lights on while a driver simultaneously coasts through the intersection. It is a wonderful metaphor for the conditions that allow the city to foster its special breed of driver.

In 2006, I was traveling around New Zealand when I came across a beach along the road on the East side of the South Island. I forget its exact location. Even though a storm was approaching, two children were playing in the water.  Upon closer examination, it looked like they were throwing box traps onto small creatures on the beach. Perhaps they were catching crabs?

Although I did a little tweaking of the colour levels in photoshop to bring out the contrast, and enhanced the sharpness, the scene is largely as it appeared that day.

One of his favorite activities before bedtime is to run around in circles yelling “Papa, rockay-ship. WHOOSH!” He punctuates the statement by thrusting his arm up into the air and smiling broadly.

We have a set of one-piece pajamas with classic cartoon rocket ships printed all over. The kind with the awesome foot-to-chin zippers that make life so easy. He loses his mind if he sees them lying clean in his closet, because he wants to wear them so badly, whether to go to bed, or simply run around the house in.

He is lunar lunatic. He will diligently point out the moon every time he sees it, day or night. Indeed, he points it out even when it is hidden behind an overcast sky, has fallen below the horizon, or is simply the reflection of a kitchen light in the window.

The excited stream of “Moon! Moon, MOON, MOON, MUH-MOON, papa!” is at once cute and oddly frustrating. Particularly after the fifteenth time it has been babbled in the span of a few heartbeats. However, it highlights the wonder that we should all have when we ponder the nature of the universe. The fact that we have a large, spherical lump of rock spinning close enough over our heads every day that we can make out major features with the naked eye humbles me to this very day.

I can understand why my toddler is fascinated. I have no doubt that like countless others, myself included, the nascent desire to be an astronaut is slowly taking shape in his mind.

The difference is that this generation may actually have a greater opportunity to reach for the stars than any of us have before. With commercial endeavors in asteroid mining and even a proposed Mars colony by 2023 (yes, I know, there are significant technical hurdles to be overcome, but where there’s a will, there’s often a way; never mind the debate on whether it is right to wreck another planet since we can’t handle our own), prospects for such opportunities are looking up.

Maybe my kid will end up being an astronaut after all.

After undertaking a road trip for the past two days, my wife and I have stumbled upon an interesting metaphysical revelation.

Limbo is driving along a never ending road, shrouded in a snow storm that gobbles up light, leaving everything a flat white and making objects jump out at you with a split second to react. There are no stops other than to gas up and you can only eat at McDonald’s roadside restaurants. Did I mention there’s also a toddler strapped to the back seat in our version? Definitely not Heaven. Not quite Hell.

Maybe if we’re lucky, there’s an off ramp to Purgatory right around this bend? Nope. Guess we’ll keep on driving on.

Time to cue Johnny Cash’s Ghost Riders in The Sky. Or was that Ghost Drivers in the Sky?