Those of you who follow my Twitter stream will remember a while back that I published a few comments about Generation I.

It seems particularly topical to expand on the idea with the news today that the Mars One project has announced its shortlist of 100 candidates for the program. This is one of the final steps remaining before they announce the final 24 participants. Despite the many technical challenges that still remain to be overcome for the endeavor to succeed, this is exciting news indeed.

The Telegraph also reports that one of the participants is looking forward to having a baby on Mars. This raises a number of deep questions in the light of a situation that has not taken place in a very long time: humans will set foot on a new land, not in the service of a national interest, but rather as part of a private commercial venture.

I’ll save discussing those questions for a later time.

Instead, I want to turn my attention to the importance that this moment could represent for humankind. The possibility that a member of the human lays his or her roots down on a different planet during our lifetimes is very real. Indeed, this could make our children, those born between the year 2000 and today, prime candidates for the early participants in the flow of colonists to this new world. This marks the first time in the history of our species that our kind would span worlds. We would become an interplanetary life form.

This new generation should thus be rightfully called Generation I, or Generation: Interplanetary. Quite appropriately, it could also be read as “Generation One” as the first generation to set sail away from the cradle of humanity.

There are few parallels in history that carry as much significance. Our ancestors venturing out of Africa, the exploration and settlement of the Pacific, the discovery of North America, are some notable comparables. Certainly, each of these were fraught with danger, and none were guaranteed success. Yet, they led to great things. The same could be said of plans to colonize Mars.*

When taken in conjunction with the heightened efforts being placed on unmanned research projects like the Rosetta probe, one could believe that we are entering a new golden era of space exploration. Ventures like setting up permanent settlements on the Moon and Mars would certainly frame well in such a situation.

Someone asked me whether I would be supportive of my child wanting to immigrate to another planet. I answered unequivocally “yes.” I would certainly miss my child, and I imagine Skype conversations are a little tough to get around with the asynchronous communications resulting from the time it takes to beam a message to and from such vast distances. And yet, as we stand on the verge of a new era, it seems slightly selfish (although completely understandable) to want to hold on tight to the precious gift that we send out into the void.

Here’s to Generation I. May great things await.

The Ant Farm view: your astrobase at a glance.

Just about a year ago, we were excitedly watching the numbers rolling in on our first ever crowdfunding campaign. Even though we didn’t manage to pull in the funds we were hoping for, we promised you all that Astrobase Command would go on.

And go on it has. The project is currently moving along at a good speed, and the team has grown since the early days when Adam and Dave were feverishly working on the project in the back of an Samorran deep space freighter. 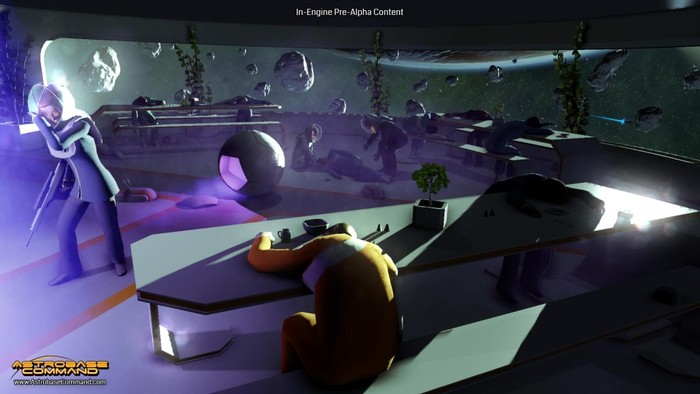 Space is a dangerous place

The art has certainly come a long way since Adam’s early space-nouveau designs, with Daniel bringing a keen Swedish sense of design worthy of the finest offerings of the Spacekea catalogue. 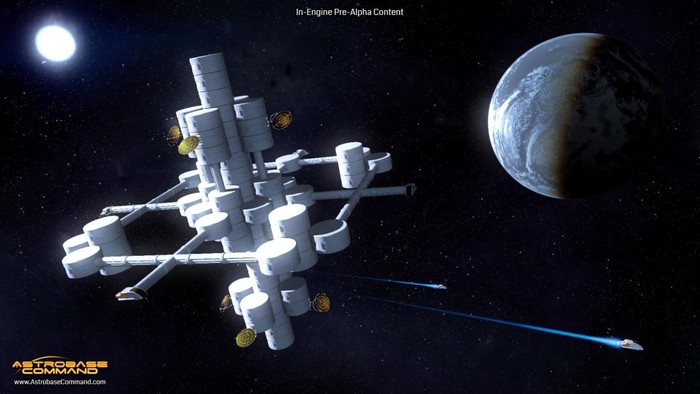 Build the space station of your dreams

In addition to improving the heck out of everything you saw in our campaign pitch, we’ve been hard at work developing some awesome new features that will let you truly experience a new game every time you play.

Daniel has devised a procedural face generator that will piece together a unique face for every crew member. It is still very early on, but the results are already quite promising. Improvements will include hair, facial hair, more variations in eye and skin colour, as well as variable positioning of the features.

Dave has also made some tremendous progress on our most exciting feature, the AI Storyteller. It builds sentence-by-sentence, and in some cases phrase-by-phrase, stories that link several events together. Each of these are threaded together to follow a story arc that will allow you to really get to know your characters, particularly since the results are generated as a consequence of the character’s traits and abilities. This means that two characters presented with the same situation will see it play out completely differently. As an example, here are two scenarios that were generated entirely by the Storyteller putting two different characters through the same situation:

Chief Blahuta began to worry he was getting lost out in the middle of the frozen lake. He started to reprogram a portable probe to act as a locator beacon, but the circuits couldn’t handle the power differential and it caused a minor explosion. (2 Energy Damage) (Character has died)

Crewman Zezelic neared the completion of his journey through the frozen lake. He paused to admire a shimmering effect and realized a fine powder of naturally occuring ceramics was storing heat from the red sun. His mood changed for the better. (Collected 1 Ceramics)

find out more about the storyteller at: http://astrobasecommand.com/?p=3488

We’re pushing hard towards a closed alpha test that will begin soon(TM). If you’re interested in taking part, make sure to swing by our forums to find out more when the time comes.

As most of you have probably heard, we were successfully greenlit on Steam Early Access before the end of the Kickstarter campaign. After talking with other devs, we’ve come to the conclusion that we need to make sure that Astrobase is sufficiently polished and developed to give players a decent play through before putting it up. Once we’ve had the chance to fix the problems our testers find and make sure everything is shiny enough, we’ll be putting it out on Early Access, so you’ll want to keep an eye on our Greenlight page for updates, too.

We need your help!

We are trending upwards on IndieDB (currently 45 of 20K+) and there is a vote going on for Indie Game of the Year. We’d really appreciate if you could take the time to pop in and vote for Astrobase Command.
That’s it for now!

Your Astrobase in all its living glory

After a few months of quiet on our end, we unveiled the fruits of our labour yesterday. We have come a long way since Adam’s proof-of-concept art. As a programmer, he valiantly led our visual development up until our crowdfunding campaign last November. However, we have now unleashed the visual beauty wrought by our pro artist, Daniel. I hope you’ll agree that the results are stunning.

Space can be a dangerous place.

It has been hard trying to resist the urge to release these gems any earlier, but we’re now ready for you to take a look. So please swing on by and let us know what you think.

We’ve teased out another little tidbit in our latest Astrobase Command development update.

We also talk procedural planet generation, the wonders of the Unity store, and give a shoutout to one of our newest allies.

To read the entire post, head over to www.astrobasecommand.com

The datapad will allow players to access information about and control what happens on their astrobase.

Our newest post unveils our newly redesigned datapad, now in glorious 3D. We also talk about some of the considerations in designing the interface and icons that we will be using. You can read the entire entry at www.astrobasecommand.com

The Astrobase Spring 20,114 clothing line melds stylish and utilitarian to make you the most popular sentient being on your block.

This week’s Astrobase Command blog update discusses some of the character design ideas we’re knocking around. Swing over to the Jellyfish Games developer blog to read it in its entirety.

A little while ago, I took a camera to one of our team meetings. It turns out we were mining intellectual gold at the time, waxing poetic about the mining, harvesting, and general resource dynamics that Dave is developing for Astrobase Command.

Although the intention at the time was to capture some B-roll footage for an upcoming game trailer, some of the information helped address a question that Ethan asked us on our forums. It has the added bonus of showing something slightly more visually interesting than what we’ve been posting in our first set of vlog updates. Indeed, viewers get to spend a little over five-and-a-half minutes basking in glorious HD shots of Dave and Adam talking. A rare privilege any way you look at it.

So, without further ado, here’s the interview.

“Travel is fatal to prejudice, bigotry, and narrow-mindedness, and many of our people need it sorely on these accounts. Broad, wholesome, charitable views of men and things cannot be acquired by vegetating in one little corner of the earth all one’s lifetime.”

If more people lived by these words, the world would be a better place.

The team has been busily working away, taking the rough demo code used as a proof of concept for our Kickstarter, and turning it into the production code that will power Astrobase Command once it is released to Steam Early Access. We’ve been tackling a slew of features, from developing detailed procedural generation mechanics, to setting up servers, to creating entirely new art with which to fill the inky blackness of space.

Of greatest interest to all of you, we now have a dedicated Jellyfish Games YouTube channel, where we’ve started posting a weekly development vlog.  The updates are only talk-throughs of community-generated questions for now, but as we move along, we’ll start adding WiP imagery, including stills and gameplay footage.

If you have any questions about the game that you’d like us to answer, head over to our forums, and ask away.

Things have been quiet on the blogging front for a while, but there’s a good reason for that. We’ve been busily chipping away at the pile of work needed to make Astrobase Command ready for release on Steam Early Access this Summer. As you can imagine, there are many things that have to get done to bring a game up from a tech demo that shows isolated aspects of game play to a playable game that can be put into the hands of eager fans.

You can see more of what awaits in this development blog entry, so why don’t you go check it out?

While you’re there, why don’t you sign up to our mailing list for future updates? You can find it on the right of our home page in the “Briefing Room” box.